Flowers Hall first opened in 1972 and still continues to be used today. It is the home court for the volleyball team and the men’s and women’s basketball teams. It was named after Hubert A. “Eddie” Flowers, who was a long time head of the physical education and athletic programs. He was also the basketball program’s first coach. Flowers Hall was a great addition to the university because it gave them a great athletic facility costing approximately three million dollars. It has a seating capacity of 4,000 with both floor and upper level seating. The Flowers Hall Annex renovation added 17,800 square feet and cost one and a half million dollars. Flowers hall is a four level structure with the gym being on the third floor. It includes more than just a site for athletic events. It contains offices, class rooms, locker rooms, and special facilities for athletic training. It is also used for educational and recreational purposes. Flowers Hall is located on 615 North Pine Street in Florence, Alabama. 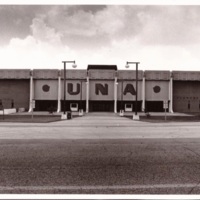