In 1815, Michael Dickson and a group of white settlers sailed in a keel-boat down the Tennessee River and up Spring creek, settling where Spring Park is now. Dickson purchased this land from the Indian chief Tashka-Ambi for two pole axes and five dollars in cash. Tuscumbia, formally known as Ococoposa, was renamed in 1822 in honor of the Indian Chief. Spring Park was originally named Big Springs, but was renamed in the 1920’s.
In 1817, Spring Park had 3 dwellings, a mill, and a store. Today, the park contains a two story open air shelter, several single story shelters, a large playground, a train, a carousel, a python roller coaster, and a splash pad. The largest man made natural stone waterfall is also located here, standing at 40’ tall and 80’ wide. 4,320,000 gallons of water pass over the falls a day into the lake. The lake also features a fountain in honor of Princess Im-Mi-Ah-Key, wife of Chief Tashka-Ambi. The fountain contains 51 jets, 1 shooting 100’ in the air in the middle and the 50 others shoot 40-50’ high. It is also choreographed to lights and music each Friday, Saturday, and Sunday night at dusk. The water from the spring supplies the town of Tuscumbia, AL. It steadily stays at a temperature of 36 to 38 degrees year round.
Many events have taken place at Spring Park and still do today. Federal troops camped on these grounds during the Civil War, and Jimmy Carter initiated his campaign to run for a second term at Spring Park on September 1, 1980. Today the Oka Kapassa festival is held at Spring Park. Oka Kapassa is a Native American gathering dedicated to celebrating the culture and traditions of the Native Americans who thrived in North Alabama. Other events include the Labor Day Festivities, Muscle Shoals Street Rod Run, and the annual Tuscumbia Fair. 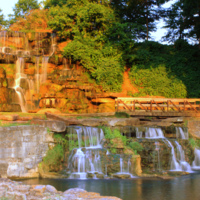