The Franklin House was one of Tuscumbia's early great landmarks.

Colonel Robert Ransom moved to Tuscumbia from Tennessee and began construction of a hotel on the southeast corner of 5th and Water Streets. The Franklin House's grand opening of this hotel was June 1, 1837. It was advertised as the “house on Railroad Street.” It was 3 stories high with sixty rooms designed to accommodate two hundred guests. Board and lodging per year was $150, per month was $15, and per week was $5. A tornado destroyed the roof and top floor of the Franklin House in 1874. The hotel was remodeled during repairs and became the main offices of the Memphis and Charleston Railroad in 1875. The telegraph was also moved here. In 1878, the hotel was renamed the Parshall House by Mr. Schuyler who bought the building. Electric lights were added in 1905. The hotel burned on October 11, 1915 from a fire started on the top floor. The building pictured sits on the site of the Franklin House today. 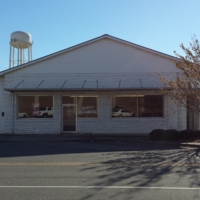