In 1835, William Young and his brother Isaac Smoot, a contractor, bought a lot on what is today the corner of Fourth and Main Streets in Tuscumbia for the purpose of opening a carriage factory. They constructed a large red brick building with a porch supported by large columns on the west side. The roomy second floor was used as a show room for Mr. Young's carriages. This business was known as 'Young's Coach Shop” and sometimes the “Old Carriage House" until the 1880s when it was purchased by A. J. Lloyd who had moved to Tuscumbia from Kentucky. Mr. Lloyd used the first floor to house the local post office and the second floor he used for an opera house. From then on, the building was referred to as “The Old Opera House.” In addition to locals who performed plays and minstrel shows, the theater was also used by traveling theater companies and vaudeville troops. General Tom Thumb, the circus midget, was possibly the most famous to visit The Old Opera House.

In 1897, the new Tuscumbia library which had been meeting at the Deshler Female Institute purchased the building through a third party. In 1897, the theater was closed for renovations and reopened two years later. The library occupied a portion of the first floor while the rest was rented to local businesses. The upstairs continued to serve as the town performance center.

In 1908, the Colbert County Courthouse burned and the library offered the upstairs as the temporary court house until a new one could be built because the theater was not used during the summer. The county offices ended up remaining here until a new court house was built. The Old Opera House also housed the post office from 1915-1936 for which the U.S. Government rented part of the building. When the post office moved out, the library moved downstairs.

In order to afford its new building on the corner of N. Main and N. Commons Streets, the library was forced to sell the Old Opera House building. The library hoped it would be preserved as a public meeting house or museum. The U.S. Department of Interior had recognized the building for its historical and architectural value. The architecture was reminiscent of colonial Williamsburg and throughout its history had housed a carriage factory, an opera house, a furniture store, a high school auditorium, courthouse, library, bus station, attorney's office, as well as numerous other locally-owned shops throughout the years. However, efforts to preserve the building were not successful and the building was sold to State National Bank, whose name was later changed to Central Bank of Alabama. The building was demolished and replaced with a newer bank building. 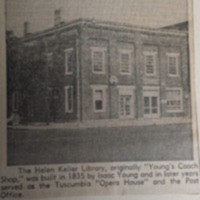