Originally owned by James Jackson, one of Florence’s founding fathers, the Forks of Cypress was one of the earliest Greek Revival homes built in Alabama. The home featured a temple-type veranda supported by massive columns that surrounded the exterior of the house.
The Forks of Cypress plantation house burned on June 6, 1966. A severe thunderstorm produced cloud-to-ground lightening that struck the mansion, setting it on fire. The fire destroyed everything except the twenty-four Ionic columns that had surrounded the foundation. Forks of Cypress had been a part of Florence and Lauderdale County for 145 years.
The Forks of Cypress was owned by Mr. Rufus B. Dowdy at the time of the fire in 1966. The Forks served as a museum that housed around a million dollars worth of antiques. Imported china, silver and glassware, pioneer artifacts, and other museum pieces were lost in the fire. The Forks of Cypress had been the number one tourist attraction in Florence.
While the historic ruins are owned by the state and presided over by the Alabama Historical Commission, the access road is privately owned. The ruins are viewable from a distance via a public road. 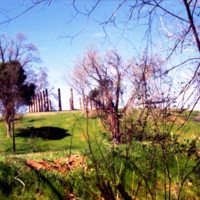 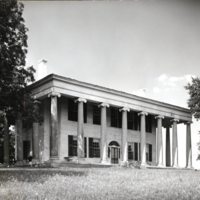