The Rosenbaum House was built in 1939-1940 with a price tag of approximately $14,000. The Rosenbaum House is located in Florence and serves as the only example of Frank Lloyd Wright architecture in Alabama. Stanley and Mildred Rosenbaum were the owners of the house until 1999.
Frank Lloyd Wright designed the Rosenbaum House using the Usonian architectural style. The house was designed to blend with and rise from the landscape, and features carports, flat roofs, overhanging eaves and a concrete floor. The home is constructed from cypress, glass, and brick.
Wright designed a 1,540 square feet floor plan. Storage space was a key component, and every inch of the house was meant to be used to the fullest extent. The kitchen is a tiny workspace that allows for standing room only.
There were numerous problems with the home’s construction. The chimneys were not ventilated properly. The flat roofs did not drain, so water leaked in. Despite these problems, an addition was added in 1946-1948, with Wright designing the plans. The addition added an additional 1,084 square feet, adding two wings to the house and enlarging the kitchen. A second carport was also added at this time.
The Rosenbaum House was purchased by the city of Florence in 1999 for the sum of $75,000. Termite and water damage had caused extensive structural problems over the years, requiring between $600,000 and $700,000 of renovations. The house now serves as a museum and is open for tours each week Tuesday through Sunday. 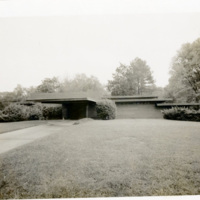