The Jefferson Hotel met a need for Florence in 1902 because the city did not have a large hotel on the scale of the Jefferson at the end of the nineteenth century. The patrons of the Jefferson stayed at a hotel that had furniture of antique oak finish with metal beds that had perfection mattresses and downy pillows for the customers to sleep on at night. In all, the furnishings for the fifty room hotel cost over eleven thousand dollars.

The Jefferson Hotel lasted until the early 1920s before the building was destroyed by fire. The modern Hotel Negley was built on the site. 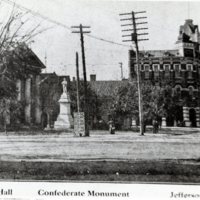