Colonel Pickett Place, Home of Richard Oric Pickett a Colonel of the 10th Alabama Infantry under the “Defender of North Alabama” Confederate General Philip Roddey. The house is a “double-pile cottage” and rare example of Tidewater architecture in Alabama. The style originated on the southern coast during the colonial period. The house was built in 1833 by Thomas Crowe for his new bride, Elizabeth Hooks, as a wedding present.
Richard Oric Pickett’s father, from a Virginia planter family, had moved to Limestone County Alabama in 1829 when Richard was six years old. Richard moved to Florence to begin his study of law in the office of James Irvine. He married Fannie Boggs a sister of Irvine and cousin to Union General Ulysses Grant. The couple moved into what is now known as Pickett Place. Pickett began his own law practice in Moulton. After the outbreak of the Civil War, Pickett organized a group of volunteers for the Confederate army as Company H of the 35th Alabama Infantry. He led the company in the Battles of Baton Rouge and Champion Hill. Pickett was given command of the 10th Alabama Infantry and promoted to Colonel in November 1863. 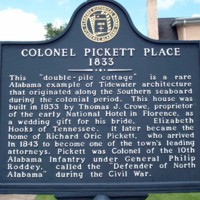 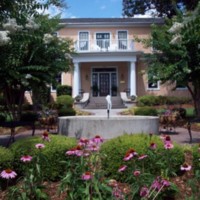