(Michael) Jason Isbell, who was born on February 1st, 1979, in Greenhill, Alabama (two miles from the Alabama-Tennessee state line) is an Alabama musician and songwriter whose work very much embodies a distinctive sense of place.

He grew up in rural Alabama, attended Rogers (a school that serves kindergarten through grade twelve), and the University of Memphis.

Family members taught him to play musical instruments and he was playing professionally at the age of fourteen. Many local musicians, including David Hood, served as mentors to Isbell and he got a publishing deal with FAME Studios in Muscle Shoals when he was twenty-one years old.

"Southeastern," a solo album, was released in 2013 and was a critical success. Isbell won the 2014 Americana Music Awards for Album of the Year, Artist of the Year, and the song, "Cover Me," from the album was named song of the year.

"Something More Than Free," released on July 17, 2015 debuted at number one on Billboard Magazine's rock, folk, and country record charts. 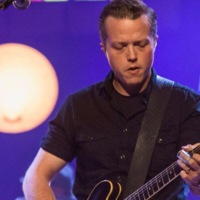