The Rural Arts Studio, based in Newbern, Alabama, is a design-build architecture studio run by Auburn University. The studio was founded in 1993 by architects Samuel Mockbee and D. K. Ruth, and Andrew Freear is the current director.

The Rural Studio has built more than eighty houses or community projects in Hale, Perry and Marengo counties in Alabama's impoverished "Black Belt."

Each year three thesis projects by groups of three to five students are built by the students. One of the goals of the project is to build decent and affordable housing for the individuals in Hale County who live in poverty.

The Rural Arts Studio has been featured on National Public Radio, "Sixty Minutes," and other international and national publications.

Photograph courtesy of the Archives at the Ralph Brown Draughon Library at Auburn University. 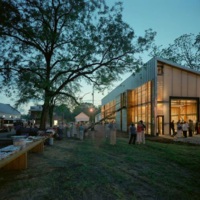