Description: Leo was born April 14, 1974 in Knoxville, Tennessee. He came to UNA on July 22, 1973. Dr. Robert M. Guillot established a new tradition by making UNA the only school in the country to have a live lion mascot living on campus. In addition to being UNA’s mascot, Leo was also a tourist attraction. Leo died January 20, 1988 and Leo II took his place in July of 1988. He was brought to UNA with the help of the Shoals community. UNA now has a system where all funds associated with the care and feeding of Leo III and UNA, the operation of their habitat, and the conduct of a related educational program are funded exclusively by charitable contributions. Leo II died in February of 2000 and he was replaced by the lion that currently is the king of the jungle at UNA, Leo III. He and his sister Una were brought into UNA in the year 2002. 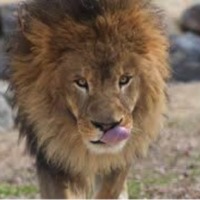