When the East Alabama Male College opened its doors in 1859, William James Samford was one of the first eighty students to enroll. When the Civil War broke out in 1861, Samford enlisted as a private in the Confederate Army where he was soon promoted to Lieutenant. Serving primarily in the western theater of operations, he campaigned in Tennessee and Kentucky before he was captured at Baker's Creek, Mississippi in 1863. He then spent eighteen months in prison at the prisoner-of-war camp on Johnson's Island in Lake Erie where he met his former professor William F. Slaton.

After the war, he returned to Auburn for a year to farm and study law under his father, after which he served in both houses of the Alabama legislature and eventually in Congress where he appropriated money for the reconstruction of Old Main Hall which had burned to the ground in 1887. He became the 31st Governor of Alabama in 1900. The newly reconstructed building was named Samford Hall in his honor in 1929. 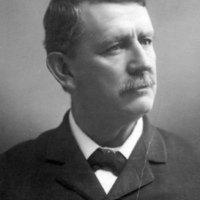