After the state awarded East Alabama Male College its charter on February 7, 1856, the Board of Trustees set about securing funds to build an administrative and educational building. The trustees initially allocated $25,000 for the facility, but the building that came to be known as Old Main Hall required an expenditure of approximately $60,000 to complete. Stephen Decatur Button, a nationally prominent architect, designed and built the four-story Italianate-style academic building.

Old Main Hall was the primary building of the East Alabama Male College from 1856 until 1887. During the Civil War, EAMC suspended operations like so many of the country’s other academic institutions. As faculty, staff, and students left school to join the Confederate war effort, the EAMC shuttered its doors from 1861 to 1864 when Old Main Hall, Langdon Hall, and the Chapel were converted into makeshift hospitals for wounded soldiers arriving from Atlanta. In 1864, Texas’s state legislature paid to convert Old Main Hall into a convalescent hospital that they dubbed Texas Hospital. The ramshackle hospital housed over four hundred Confederate soldiers, many of whom never saw their homes again and were buried in nearby Pine Hill Cemetery.

Old Main also acted as a parade ground where soldiers from nearby Camp Beauregard and Camp Johnson marched and drilled during the war. In July 1864, Major General Lovell H. Rousseau and his force of approximately 2,500 Union cavalrymen raided the cities of Auburn and Opelika where they destroyed thirty-five miles of railroad tracks, the local post office, and Pebble Hill. In an effort to defend the city, sixteen-year old John Hodges Drake and approximately thirty or forty convalescents from the Texas Hospital offered some token resistance to Rousseau's raid, to little avail. The Federal cavalrymen left the bedridden and newly minted prisoners alone and did little damage to civilian property.

In fall 1866, students returned to attend classes in a building ravaged by the elements and war. In the early morning of June 24, 1887, a fire broke out in Old Main Hall’s lower basement chemistry lab. The ensuing conflagration consumed the entire building. In the immediate aftermath of the fire, the students met for classes in the Chapel. In 1888, the school erected a new administration building, William J. Samford Hall, on Old Main Hall’s original foundation. Old Main Hall’s cornerstone is still visible at the base of the northeast corner of Samford Hall. Old Main Hall’s building originally occupied the space that is now 182 South College Street, Auburn University. 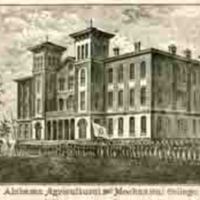 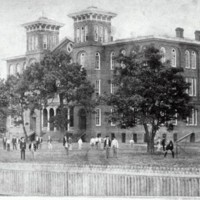 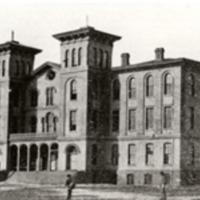