In the spring of 1913, Loachapoka became the site of the first of over 5,300 rural black schools in the United States subsidized by Sears CEO Julius Rosenwald. Rosenwald, who grew up destitute, wanted to provide African Americans living in the South with the opportunity to acquire an education in the years before desegregation. He contributed $300 to the school’s building fund and the white and black citizens of Loachapoka raised the remaining $493. The two-room building contained a fireplace to accommodate its heating needs and glass-paned windows. The building initially lacked both electrical wiring and indoor plumbing. The elementary school serviced grades one, two, five, and six, while grades three and four were taught nearby at the Lee Crossroads School on Lee County Highway 188.
Eventually, Loachapoka Rosenwald School closed as the town’s African-American children enrolled in other elementary schools, but the town continued to use the building as a community center. In 1960, a fire consumed the wooden structure. Now only a scant few bricks and a portion of the broken concrete foundation remain of the school, which is located on the property of Mt. Zion Missionary Baptist Church at 2 Day Lily Street, Loachapoka.

Dr. Ann Pearson, a former Auburn English professor, researched the Loachapoka Rosenwald School, determined that it was Rosenwald’s first rural school, and spearheaded an initiative to erect a historical marker at the former site. On November 11, 2011, the Lee County Historical Society hosted an event to commemorate the Loachapoka Rosenwald School at which several former students and teachers spoke. Emogene Willis Crittenden, a former student, remembered her principal, O.L. Randolph, as a mild-mannered father figure. Due to a lack of public visibility at the actual site of the school (which is located behind Mt. Zion Missionary Baptist Church), the Lee County Historical Commission decided to place the marker across Day Lily Street from the church. 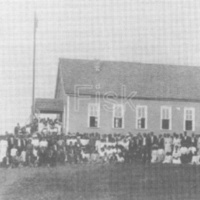 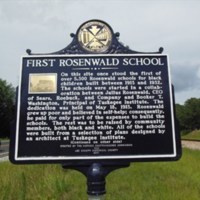