Established by charter in 1856 as East Alabama Male College, the academic institution that would come to be known as Auburn University was founded ten years before Lee County’s inception. Local residents, such as John Bowles Glenn, the pastor of Loachapoka Methodist Church and president of East Alabama Male College’s first Board of Trustees, comprised much of the institution’s early leadership. Erected in 1859, Auburn’s original facility was a four-story building in which six faculty members serviced a student body of 80. This building, known as Old Main Hall, served as a convalescent hospital for Confederate veterans during the Civil War.

Most of the young men enrolled at the nascent institution enlisted in the Confederate Army in 1861. Closed for the duration of the Civil War, East Alabama Male College reopened in 1866. In 1872, under the auspices of the Morrill Act, Auburn was named Alabama’s land-grant college and was renamed the Alabama Agricultural and Mechanical College. Also, during that year President James Ferguson Dowdell and the Board of Trustees voted to turn ownership of the college over to the State of Alabama. A state tax on fertilizer in 1883 and the 1887 Hatch Act provided President William Leroy Broun with funds to purchase land for institutional expansion and the foundation of a scientific research facility. In 1887, Main Hall burned down. The following year, private contractors rebuilt on the site of Main Hall, and Auburn’s administrative brass decided to name the new building Samford Hall, in honor of Governor William J. Samford, a resident of nearby Chambers County.

Alabama Agriculture and Mechanical College’s first female student matriculated in 1892, and the institution’s first football team also took the field that year. The institution was renamed Alabama Polytechnic Institute in 1899 via a proposal by President Broun. In 1908, Smith Hall and several other buildings on campus were equipped with electric lighting. The 1914 passage of the Smith-Lever Act made API the headquarters of the agricultural extension system in Alabama. Under the leadership of future API President Luther N. Duncan, the extension system became a seminal educational tool. Extension agents at Auburn were instructed in the techniques of better farming through the implementation of scientific research, and in turn disseminated that knowledge to rural Alabama farmers. From 1941 to 1945, the university grounds served as a training area for the Army and Navy. In 1960, the board of trustees renamed the institution Auburn University, a nod to the sobriquet that generations of students had already bequeathed to the school. 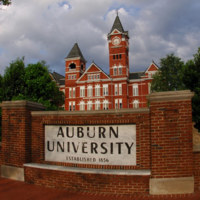