O’Neal Hall was the “The Dormitory for Women” at the Florence State College, known now as the University of North Alabama. Completed and occupied by September 1st, 1913, the total cost of the building was $91,000. At its time, it was one of the best equipped dormitories in the South. A beautiful brick structure with stone trimmings, O’Neal Hall was located on Wesleyan Avenue, overlooking the campus, facing Wesleyan Hall and the Annex.

O’Neal Hall received its name after Edward A. O’Neal, president of the Alabama Farm Bureau in 1930. The 4-story building was constructed to board 125 students. In addition to bedrooms, baths, and other usual dormitory facilities, O’Neal Hall consisted of a cafeteria on the first floor, a reception hall, a lounge, and offices.

O’Neal Hall was unfortunately torn down to accommodate room for the expansion of a Student Union Building, but the steps that once lead to O’Neal Hall are still visible from Wesleyan Avenue. The dormitory was located where the University of North Alabama’s Guillot University Center stands today. 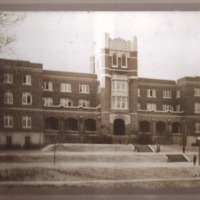