The Deshler Female Institute was named in memory of Brigadier General James Deshler. The land and building, previously a home, was donated on December 6, 1871 by James Deshler’s father, Major David Deshler. David wanted to donate the land and home in his will, as a tribute to the memory of his son. The original buildings were destroyed by a tornado on November 22, 1874. The buildings were rebuilt in 1875. The Institute closed in 1917 due to lack of funding.

The Institute remained predominantly empty until 1924, when the city tore down the old building to build a new one. The new building would become the Deshler High School. The Institute was centrally located in Tuscumbia and surrounded by Main Street, Dickson Street, Second and Third Streets. 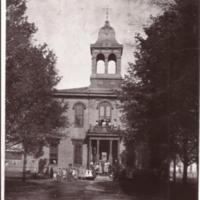