After LaGrange College moved to Florence in January 1856, a group of LaGrange citizens organized a college in the vacant buildings under the old name, LaGrange. To increase patronage, a military feature was introduced in 1857. The college reopened in February 1858. as LaGrange College and Military Academy. The Academy soon flourished and became known as the “West Point of the South”. In 1860, the name was changed to LaGrange Military Academy. During its existence, 259 cadets from 9 states attended the Academy. The Academy was forced to suspend classes on March 1, 1862, due to cadets leaving to join the Confederate Army. Major J.W. Robertson was authorized to organize the 35th Alabama Infantry Regiment, C.S.A.. Robertson was elected Colonel of the regiment and the remaining cadets of the Academy formed part of one company. On April 28, 1863, the 10th Missouri Calvary of the Union Army burned the Military Academy. The village of LaGrange dwindled away after this. 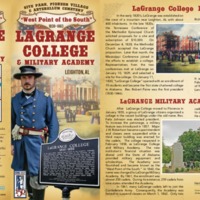