The Tennessee Valley Art Association was incorporated in 1964 in order to create an art museum and develop public programming related to the arts. The Tennessee Valley Art Center was constructed in 1972 on property provided by the city of Tuscumbia. The Association began a series of concerts at local churches in the late 1970s and founded two music schools and two theater programs in the 80s. For five years, these programs rehearsed in the Art Center before they incorporated separately as the Shoals Symphony. In 1998, the Art Center added an extension which doubled exhibition space, providing a workshop and art storage. The permanent exhibition of the Martin Petroglyph , a 3,000 pound boulder depicts human footprints and snakes carved by the prehistoric people of northwest Alabama. Objects include shell and stone carvings, pottery, and projectile points of the earliest people of the area. A plaza honoring TVAA founder, Ethel Davis, was constructed in 2008. The museum's name was changed to The Tennessee Valley Museum of Art in 2009.

The museum is open Monday – Friday, 9 a.m. - 5 p.m. and Sundays 1 p.m. - 3 p.m. Admission is free on Sundays. It is closed on Saturdays and all major holidays. It is located at 511 N Water Street, Tuscumbia, AL and is adjacent to the Helen Keller Birthplace and behind the Helen Keller Public Library. Parking is available on the east side of the museum on Water Street, but one must enter the museum from the west side of the building. 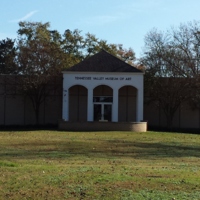