The Brown-Proctor House is primarily significant for its associations with John F. Proctor, a local politician who purchased the house in 1907 and gave it its current appearance. Proctor was a prominent attorney who served in the Alabama House of Representatives from 1892-1895 and in the Alabama Senate from 1896-1899, holding the office of Secretary of the Senate. He was a member of the Alabama Constitutional Convention and later served as a court-appointed attorney in the first trial of the Scottsboro Boys in 1931. After his death in 1939, the house continued to be occupied by his family until the early 1980s.

Completed in 1881 for John A. Brown at a cost of $3200, the house was advertised for sale in the following year and with one interim owner was purchased in 1884 by General John R. Coffey for his daughter and her husband, Mr. and Mrs. Charles W. Brown. The couple occupied the house sporadically until its sale to John Franklin Proctor in 1907. Between 1907 and 1911, Proctor extensively remodeled the house, giving it its present appearance. The house remained in the Proctor family until 1981, when it was acquired by the Scottsboro Museum Commission. (from Mertins, Ellen; Judith Proctor (July 23, 1982). "Brown-Proctor House". National Register of Historic Places Inventory-Nomination Form. National Park Service.)

Since 1985, the Brown-Proctor house has served as the home of the Scottsboro Jackson Heritage Center, a historical and cultural museum focusing on Scottsboro and Jackson County. 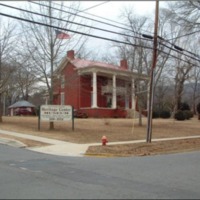