Skyline Farms was an effort to build a “new world” in rural America. It would be a world in which tenant farmers, hit hard by the Depression, would become self-sufficient landowners and live in an idyllic village. The program was started by the Federal Emergency Relief Administration in 1934 and operated later by the Resettlement Administration and the Farm Security Administration. Skyline Farms, carved out of the mountain wilderness, was one of some forty “farm communities” established during the Franklin Roosevelt Presidency.

The federal government acquired some 18,000 acres of land for Skyline Farms, initially called “Cumberland Mountain Farms”. The program was intended for out-of-work tenant farmers and participants were carefully screened in regard to character and work records. Families were to have a new start in life by acquiring a home and eventually their own 40-acre farm. The program also provided work for the unemployed in the area through construction of roads and buildings. Additionally, the government built a small factory at Skyline, and then leased the facility to a private company.

As with other farm community programs, Skyline Farms was controversial. Detractors labeled such programs as socialistic and compared them to communes, even though the government was trying to transform the participants into independent entrepreneurs. The programs were charged with waste and mismanagement and despite the good intentions of the project; few of the selected families were able to acquire their units. Most families could never make the one-fourth down payment and finally, under pressure from Congress, the Farm Security Administration ended its farm community programs and units at Skyline were sold to private buyers. Sadly, Skyline Farms families who could not make their down payment were forced to leave their homes.

Skyline Farms did have its benefits. It carried many families through the worst part of the Depression and people received adequate health care, food, clothing, and housing during very hard times. Many participants learned skills at Skyline Farms that permitted them to find work as painters, stonemasons, or carpenters after they left the project. And the children of the project obtained educations that would last a lifetime. (from the Alabama Historical Association historical marker, compiled from research by Dr. David Campbell) 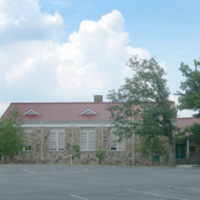