Constructed by the Union Army in the summer of 1862 and expanded in 1864, using soldiers and freed slaves, Ft. Harker was built on a broad hill a quarter-mile east of town. It overlooked Crow Creek and was well within firing range of Stevenson’s strategic railroad lines, supply depots and warehouses.

Ft. Harker was an earthen redoubt, 150 feet square, with walls 14 feet high, surrounded by an 8 foot deep dry moat. It contained 7 cannon platforms, a bomb-proof powder magazine, a draw-bridge entrance and an 8-sided wooden blockhouse at its center. Soldiers building the fort reported that “the soil is very hard, requiring the continual use of a pick.” Despite that, Ft. Harker was critical to Union plans. The officer in charge was ordered by his commanding general “to work night and day” to complete the fort “as rapidly as possible.”

One other large fort, two smaller redoubts and at least seven blockhouses were constructed along the railroad lines at Stevenson during the Civil War. No major fighting occurred here, but skirmishes and sniper attacks were common as territory traded hands between Union and Confederate forces.

Listed on the National Register of Historic Places 5/2/77

Historical marker erected at the site by the Alabama Historical Commission 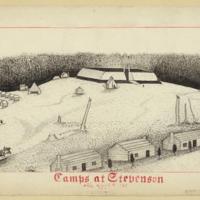