In February 1861, president-elect Jefferson Davis rode a train from his plantation in Mississippi to Atlanta and then to Montgomery, Alabama for his inauguration as president of the Confederacy. On February 16, at the Auburn train depot, president-elect Davis reviewed the Auburn Guards, a company of cadets from the East Alabama Male College who were reportedly the first of the Confederate Army to be reviewed by Davis.

Because the Montgomery and West Point Railroad connected Auburn with the state capital at Montgomery and the vital industrial city of Columbus, GA, the Auburn train depot and tracks were later destroyed under Rousseau and Wilson's raids, in 1864 and 1865 respectively. It was replaced by a second station after the end of the war which was located to the west of the current (and final) depot. In 1893, the Auburn cadets formed an honor guard when former Confederate president Jefferson Davis's body was sent by train from New Orleans to Richmond. In commemoration of the former president's visit to Auburn, on March 30, 1914, the United Daughters of the Confederacy unveiled a marker near the depot that stands today. 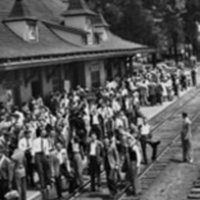 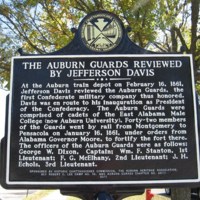