The Hotel Reeder originally had the “new building,” which served as the hotel, whereas the "old building" served as a livery where mules would be penned, bought, and sold on the upper floor of the older building. When the livery industry became an obsolete trade the mule pen closed, and the old building became a boarding house and a scrap iron business. Eventually the boarding house and the scrap iron business closed and the building was absorbed by the Hotel Reeder. The building was a part of the hotel until its closure in 1967.

During the 1920s through the 1940s the Hotel Reeder was the prestigious hotel in Florence, housing the headquarters of the Democrats in Florence. Many congressional representatives and dignitaries stayed as guests at the hotel. Probably the most famous of these dignitaries were the staff of President Franklin Roosevelt when he came to visit Florence and Wilson Dam in the early 1930s. Other famous visitors included the singers, actors, and actresses of the musicals, plays, and operas that visited the Princess Theatre in downtown Florence- since the Hotel Reeder was across the street from the entertainment venue. Even fox hunting conventions were held at the Hotel Reeder, and the participants would stay at the hotel, wake up very early, and travel to Rogersville to release the hounds and hunt foxes. On in to the 1940s the Hotel Reeder would have many soldiers and their families as guests of the hotel because of the Courtland Air Base in the area during World War II. Unfortunately, after World War II, the Hotel Reeder became less and less popular until the doors of the hotel closed in 1967.

McDonald, William Lindsey. "A Walk Through the Past: People and Places of Florence and Lauderdale County, Alabama." Killen, Ala., Bluewater Publications, 2003. 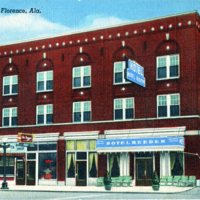