Mr. McDonald graduated from Florence State Teacher’s College in 1952. He was also a graduate of the Military Police School, the Army’s Command and General Staff College, the Army Finance School, and the Industrial College of the Armed Forces. His education also included seminary training.
McDonald served as Chairman of the Florence Historical Board from 1968 to 1989. He was designated the City Historian in 1989. He had a historical column in the Times Daily for many years, and was a frequent contributor to the Tennessee Valley Historical Quarterly journal. During his lifetime, McDonald wrote over fourteen books on Muscle Shoals area history. McDonald passed away in 2009.

William Lindsey McDonald, A Walk Through The Past: People and Places of Florence and Lauderdale County, Alabama. (Bluewater Publications, 2003), ii. 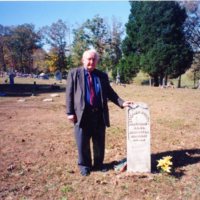