Noting Johnson’s irritation over the violation of the spirit of his order and fearful of being censured by either him or the Department of Justice, in 1971 Opelika’s school board purchased property and quickly began erecting a new high school. They recognized that the Denson Drive campus was too small to accommodate the newly-integrated student body. Completed in less than 10 months by a Texas-based architectural firm, the new Opelika High School opened in fall 1972. No massive white flight or significant violent episodes occurred upon the school’s full integration. In the years since its opening, Opelika High School constructed an on-campus football stadium, a performing arts center, a new band room, and a video production studio. The school stands to this day at 1700 Lafayette Parkway, Opelika. 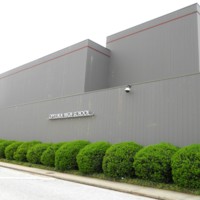