The National Register nomination covers three houses facing Wilson Park, the only remaining houses from what was once a prominent Florence neighborhood. The houses were built between 1890 and 1918 and represent typical upper middle class residential architecture of the time. The original plans for Florence, as surveyed and plotted by Ferdinand Sannoner, set aside a city block as a “public walk”. This allotment was adjacent to the lot designated for a school and which was subsequently developed as the Florence Synodical Female College, the “public walk” became the City Park complete with gas lighting, cedar plantings, and a bandstand. Building lots around the park became highly desirable for residential development. During the city’s economic boom from the 1880s through the 1920s, fashionable upper-middle class homes were built around the remaining three sides (north, east, and west) of the park. Over time the college was demolished and the post office and larger park footprint expanded on to the site of the Florence Synodical Female College. Commercial structures took the place of the late 19th early 20th century residential structures to the east and west leaving only three houses on the north side as a reminder of the earlier neighborhood.
The house at 209 Tuscaloosa Street was constructed around 1890 and in 1894 became the home of local pharmacist, Charles Morton Southall. The Southall Drug building on Court Street is also on the National Register. The two and a half story asymmetrical frame house has Queen Anne and Shingle style features including a hipped roof, projecting front gable with Tudor revival detailing, a second story clad in wood shingles, and a one story wrap around porch supported by paired round columns on brick piers.
The two story brick Georgian Revival house at 217 Tuscaloosa Street was built for James Josephus Douglass about 1910. Douglass was a prominent local businessman and farmer. The house passed to his son Hiram Kennedy Douglass, an Episcopal minister and genealogist, who left the house and the adjacent Wright – Douglas House to the city of Florence in conjunction with the Kennedy-Douglass Trust for public use as an Arts Center. The Wright-Douglas House (223 Tuscaloosa Street) was purchased by Hiram Kennedy Douglass in 1939. The one and half story frame Victorian house is currently part of the Florence Arts Center.
The National Register nomination for the Wilson Park houses was written in 1978 and lacks much information that would be required of a current nomination. It is advised that this nomination be updated. 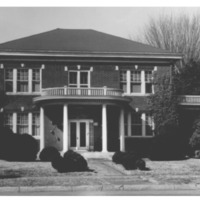