William Basil Wood was born on October 31, 1820. Wood was a LaGrange College graduate, and practiced law in Florence before the Civil War. Wood served as a colonel of the 16th Alabama Infantry Regiment and was recommended for promotion to brigadier general, but worked as President of the Military Court when he was assigned to General James Longstreet’s Corps.
Besides being a lawyer, Wood served as circuit court judge and a Methodist minister after the war. Wood was instrumental in the movement of La Grange College from Leighton to Florence in 1855. Wood was also one of the first historians of Lauderdale County.
William Basil Wood passed away on April 3, 1891. He is buried in the Florence Cemetery along with his wife, Sarah. Wood Avenue in Florence is named in his honor.

William Lindsey McDonald, A Walk Through The Past: People and Places of Florence and Lauderdale County, Alabama. (Bluewater Publications, 2003), 45-46. 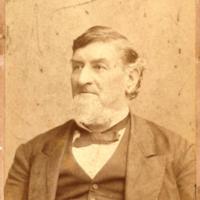