The William Bowen House at 1145 Wildwood Park Road was built in 1949 and nominated to the National Register for its significance to architecture. The one story two bedroom Lustron House is a metal prefabricated house clad in enameled steel in two foot by two foot panels. The side gable roof is also covered in enameled steel panels designed to look like tile. The interior wall and ceiling also covered in the enameled panels are original as are the built in bookshelves, vanity, and closets. At the time of the National Register nomination in 2000 most of the interior was unchanged.
The Lustron Corporation manufactured prefabricated steel and enameled paneled homes to meet the housing demands created by returning soldiers from World War II. The Columbus, Ohio based company operated between 1946 and 1950 and built 2,495 houses in a retooled Curtis-Wright airplane parts factory. The closed system factory constructed all 3,000 components of the house from steel and packaged the parts directly on specialized truck beds designed to hold and deliver one Lustron House.
Lustron Houses, like the automobile they so closely resembled, were sold by local franchised dealers. The company had no problem recruiting dealers and provided the nationwide network with a training and education center. Building crews were offered training at the Lustron Service School in Columbus. Dealers did suffer from territory disrupts, funding sources, local building code inconsistencies, and slow order delivery. In 1950 with accolades and praise from homeowners and the architectural and building community, financial problems and slow production rates forced the Lustron Corporation to close.
In Alabama Lustron Houses are closely associated with the local North Alabama South Tennessee dealer, the Southern Sash Company. The Southern Sash Company’s parent company Union Aluminum of Sheffield produced the aluminum frame windows for the Lustron Corporation. Company records as of December 31, 1949 displayed shipments for 15 houses in Alabama. The 2000 multi-property nomination for Lustron Houses in Alabama lists 9 surviving houses – 5 of which are in the Muscle Shoals area; 2 in Sheffield and 3 in Florence. All the houses in Florence are the most common plan, the two bedroom deluxe Westchester plan.
This property was listed individually on the National Register of Historic Places in 2000 for its significance in terms of architecture and engineering. The same year Nomiit was also listed as part of a multiple property nomination “Lustron Houses in Alabama”. Information for this Omeka entry was found in the individual and multi-property nomination. 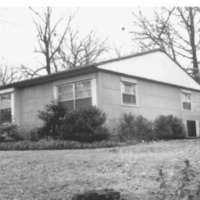