Southall Drug is significant to the history of Florence for its architectural style and as a leading business in the downtown area owned and operated by the same family for over 50 years. The 1900 building is a prime example of a late 19th century Italianate commercial structure as constructed in small Alabama towns. Italianate styled buildings were introduced in the northeastern United States as early as the 1840s and quickly spread to other cities across the country becoming one of the most popular styles by 1860. The trend continued more slowly into the less populated areas of the country and remained popular through the early 20th century.
The Southall Drug building is sited on a dominant commercial corner in downtown Florence and exemplifies the Italianate architectural style with heavy reddish-brown brick walls laid in running bond with matching mortar and arched windows separated on the second floor by brick pilasters. Though the two original heavy metal cornices, located above and below the pilasters, are missing the building still retains the feel of an Italianate structure in part because the parapet located around the front corner of the building is reminiscent of the typical Italianate tower.
The building was listed on the National Register of Historic places in 1980 and more information on the property can be obtained in the National Register nomination. All information and photos for this Omeka entry were found in the nomination. 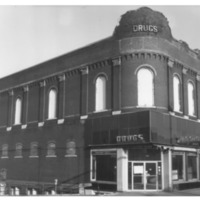