In 1931, the institution that would come to be known as Auburn High School opened on Samford Avenue at the site of present-day Samford Middle School. From 1931 to 1959, the institution was known as Lee County High School. Until 1966, the entire public facility served Auburn’s white students from the first to the twelfth grades. The school’s first administrator was the much-beloved Professor J.A. Parrish. In 1959, Auburn City Council voted to break from the Lee County School System, and Lee County High School was thus renamed Auburn High School despite serving all the white public schoolchildren in Auburn for the next seven years. A new high school to serve ninth through twelfth graders was built at 405 South Dean Road for $1.25 million in 1966 as a “Freedom of Choice” school, meaning that any student could opt to attend Auburn High School regardless of race. The persistence of de facto segregation in “Freedom of Choice” institutions led to a legal challenge in the form of Green v. New Kent County, VA. In the 1968 Green ruling, the US Supreme Court declared that school boards must take “affirmative measures” to achieve integration and ordered New Kent to convert to a school system without “white” or “negro” schools, but merely “schools.” In the wake of the Green decision, Auburn High School’s black enrollment increased significantly in 1970 as the school absorbed all of the African-American students from J.F. Drake High School. The enrollment spike forced Auburn High School to temporarily scale back the scope of its operations to the tenth through the twelfth grades, as Samford Middle School temporarily took on the city’s ninth grade students. Upon the completion of the 500 Building Extension in 1973, AHS reabsorbed the ninth grade students. Auburn High added a new high-tech classroom extension and a media center in 1995, and a $14 million performing arts center in 2010. 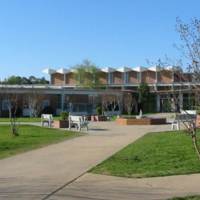