The Wright and Rice Foundry was located where the Mars Hill Church of Christ is located on Cox Creek. The foundry was built in 1835 by Williams Johnson but was sold to James Wright and William Rice. The foundry produced steam engines, mill saws, cotton gins, farming implements, and industrial machinery. At the outbreak of the Civil War, the foundry was converted for the manufacture of shells and munitions for weapons, ranging from large cannons to musket balls.
This made the foundry a primary target for the Union force commanded by Colonel Florence M. Cornyn. The force of 1,380 men left Corinth, Mississippi, on May 26, 1863, on a mission to destroy the industrial capacity of Lauderdale County. Cornyn’s forces destroyed the foundry, along with many other industrial sites in the County, and then withdrew back to Mississippi. 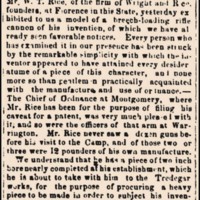