Wilson Dam is a gravity dam spanning the Tennessee River between Lauderdale and Colbert counties in the quad cities area. The dam was originally constructed by the US Army Corps of Engineers between 1918 and 1924. The project was envisioned as a part of the National Defense Act of 1916 during the run up to World War I to provide power for two nitrate plants intended to produce explosives for the war effort. The massive federal program cost $130 million dollars, however the first electrical generation from the plant was not until 1925 long after the end of the war.
Although the properties attracted the attention of notable industrialist Henry Ford, who offered $5 million for them and promised to make the shoals the “Detroit of the South,” they languished in governmental limbo until the New Deal programs of Franklin Roosevelt. Impressed by the potential of the properties, Roosevelt’s team made the dam’s operational model the theme for the TVA’s economic invigoration of the entire Tennessee River region. The model was to incorporate a threefold purpose for each dam; flood control, navigational locks, and hydroelectric power generation.
The dam has underwent few significant change in structure since its completion. An expansion of the locking system was completed in 1959 making it the largest single-chamber system in the world at that time. There has also been an additional nine spillways have been added. However, the neoclassical style incorporating elements of ancient Greece and Rome has remained a distinguishing feature for Wilson Dam as the only dam in the TVA system with that architectural style. 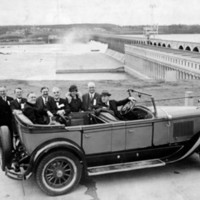 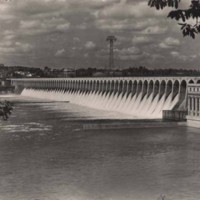 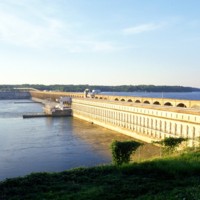