One of the largest Rosenwald schools erected in Alabama, the ten-room Lee County Training School served first- through twelfth-grade African-American students in the Auburn area starting in 1928. Lee County Training School became the first black public high school in Lee County’s segregated school system. When the school opened, it only serviced ten grades, but it quickly became a twelve-grade school. Clarence Jackson became Lee County Training School’s first principal. Erecting this facility proved quite expensive, as the entire endeavor cost $21,900. Philanthropist Julius Rosenwald contributed $2,350, Auburn’s white community donated $5,000, Auburn’s African-American community raised $5,000, and the state government allocated $9,500 to found the school. The ten-room facility consisted of four classrooms and a boiler room downstairs and four classrooms and an auditorium upstairs. Half of the boiler room functioned as the school cafeteria. The school closed during the Great Depression (for the 1932-3 school year), but reopened the following year under the leadership of new principal Lamar Player.

Although many of Lee County Training School’s students lived well below the poverty line, they conducted food drives every Thanksgiving to distribute food to the county’s truly impoverished. The school habitually struggled to secure proper funding for its daily operations and faculty salaries. Although the state made no budgetary provision for education in the arts at Lee County Training School, a devoted core of faculty used mandatory weekly meetings to facilitate the students’ comprehension of drama, music, and elocution. In 1949, Lee County Training School organized its first band. The school bought a bass drum, two snare drums, a tuba, and two French horns, and parents purchased the rest of the instruments. Teaching resources often consisted of a blackboard, chalk, and an eraser. Because the history textbooks selected (but not purchased) by the State of Alabama mentioned no African American achievements, many of the teachers used outside resource materials to teach history. In 1957, Lee County Training School, long since overburdened with too many students for its building to accommodate, closed to make way for the opening of J.F. Drake High School. The city demolished the building in 1963, and a historic marker resides on the former site of the school in Martin Luther King, Jr. Park at 190 Byrd Street, Auburn. 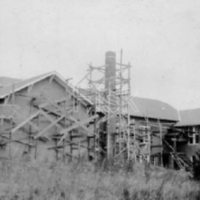