The site of Willingham Hall, which is located on the University of North Alabama’s campus in Florence, Alabama, and Willingham Hall (One Harrison Plaza) itself have many stories to tell. Willingham Hall is located on the site of what was once private property with a private home, and later, the site of Locust Dell Academy for Girls. The land on which the building is located was first developed in the early 1800s (pre dating Alabama’s statehood, 1819) by an anonymous Florentine. The house was purchased in 1830s by Mr. and Mrs. Nicholas Marcelius Hentz, an educated couple who moved to Florence from the Chapel Hill, North Carolina area where he had been a Professor of Modern Languages at the University. Mrs. (Caroline Lee) Hentz was a writer.

The couple opened the Locust Dell Academy for Girls, which was named for the locust trees on the property, in 1834. The Academy was closed “with the coming of the War for Southern Independence.” The Hentzs sold the house which was used as a private home by various owners until 1871.

Major Henry Wood, for whom Wood Avenue is named and one of the first mayors of Florence, purchased the house in 1871. He owned the house for several years prior to the purchase of the home by the University of North Alabama (which was, at the time, the first state supported teachers college and first co-educational college south of the Ohio River). Shortly after the University acquired the house,
(around the 1900s), it burned to the ground.

Willingham Hall, which was located on Morrison Avenue, was built in 1939, with renovations in 1977, and 2007/08. The building was originally used as a dormitory for men and named for Dr. Henry J. Willingham, who was President of the University from 1913 through 1958, when the dorm housed
women.

The building, which houses the offices of the English, History and Political Science and Criminal Departments, is a three story, masonry, and steel structure.The building contains 20,464 square feet, 10,827 net assignable.

Willingham Hall was constructed with funds and labor provided by President Franklin D. Roosevelt’s Work Projects Administration. At the time of construction the building was described as “a three-storied, fireproof building, ‘modern in every way’.”

Photograph, circa 1981, is courtesy of the Archives at the Collier Library, University of North Alabama, Florence, Alabama. 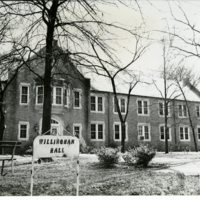