With the influx of workers, mainly from the CCC, mess halls were built in the villages to help feed all of the men. Village No. 2 housed one mess hall. 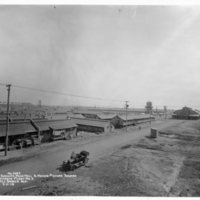