The Nathchez Trace was once a path used by Native Americans in the region, including the Choctaw and Chickasaw Indians. It was a popular path for pioneers and settlers to take as well. Once there was better navigation on the river, with the invention of steamboats, use of the Trace decreased.
The Trace runs from Natchez, Mississippi to Nashville, Tennessee. It is a 444 mile parkway managed by the National Park Service now that crosses Mississippi, Alabama, and Tennessee. A compact was formed in 1999 to create and maintain the Trace parkway. The primary object of this pact is to bring visitors to the Natchez Trace Parkway and to encourage people to explore the Trace. In the Shoals area the Trace goes through Tuscumbia, Sheffield, Muscle Shoals, and Florence. 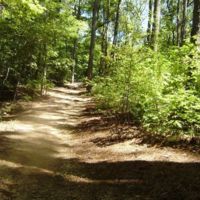