The Railroad Bridge is a part of the TVA Nature Loop. The TVA Nature Loop is a 2.5 mile loop trail on TVA protected land. Overall, there are roughly 11 miles of footpaths in the area. The loop is around a section of the TVA reservation. The path is well paved and taken care of. People with disabilities should be able to navigate along the path. The park is pet friendly. One of the most interesting features of the trail is the Railroad Bridge.

The bridge once crossed the expanse of the river from Muscle Shoals to Florence. It originally had an upper and lower deck. People, carriages, and animals could travel along the bottom deck while trains crossed across the top. The pier itself dates back to 1832, and the rest of the structure dates to 1903. The original bridge opened in 1839 as a toll bridge.In 1939, the bottom part of the Old Railroad Bridge, which allowed traffic and pedestrians to get across, closed because O’Neal Bridge opened for traffic. The Old Railroad Bridge was only used for train crossing until it was closed in 1988. Now only a portion of the bridge still exists and has been renovated for the walking trail. The bridge is a popular spot for pictures in the area. 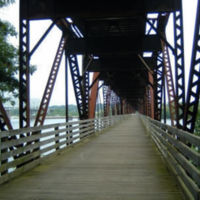 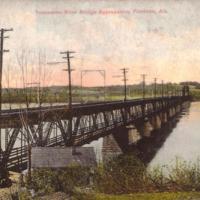