Henry Ford, in 1921, wanted to buy the unfinished Wilson Dam and two nitrate plants in Muscle Shoals. The United States government was willing to sell both to a private company with the intention of producing nitrate fertilizer.
Ford's dream was to develop North Alabama in the same way that he had developed Detroit, Michigan.

The dream died but two streets in Muscle Shoals -- Ford and Edison -- are a reminder of Ford's desire to build a seventy mile city in North Alabama. 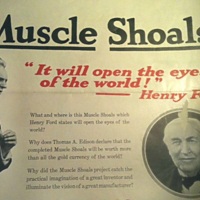