Alfred Hugler Moses, who was appointed the first mayor of Sheffield, Alabama by the governor of the state, moved to Sheffield in order to build the Sheffield Land, Iron, and Coal Company.

Moses, who had been a captain during the Civil War and a land developer after the war, wanted to create an industrial site on the banks of the Tennessee River. He believed the area would be more advantageous than Birmingham because of the coal and iron deposits in Franklin, Winston, and Walker counties and the proximity of a major waterway.

He and his brother, Mordecai, formed the Sheffield, Iron and Coal Company. with financing from a New York bank to build a railroad from Franklin County. The brothers started selling lots on May 8th, 1884.

Alfred, who was forty three at the time, moved from Montgomery to Sheffield to supervise the construction of streets and sidewalks, the building of a bank and school, and the first iron furnace in the area creating a land boom.

Over-speculation, competition, and a decline in the cost of pig iron caused the business financial difficulties. The brothers were able to pay their debts but the company was closed.

Alfred Moses died in St. Louis in 1918 and is buried in Montgomery, Alabama. 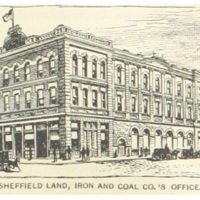