Andrew Freear, the Wiatt Professor of Architecture at Auburn University, became the Director of the Rural Arts Studio in Newbern, West Alabama in 2002.

He moved to Alabama over a decade ago to direct the Rural Studio, a hands-on architectural pedagogy that teaches students to design and build homes for the rural poor and community projects in addition to improving the living conditions in West Alabama.

Photograph courtesy of the archives at the Ralph Brown Draughon Library at Auburn University, Auburn, Alabama. 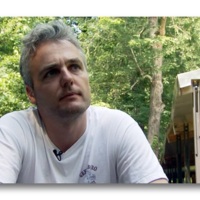