Notes from the Teague Memoirs of Shelby County tell of a man who lived on this side of the river at McGowan’s Ferry (just south of the site of the SEGCO Steam Plant). He had an understanding with an Indian friend on the Talladega County side. The Indian has promised to warn his friend when his people were on a rampage. One day, the white man saw the smoke signal and spread the alarm thet the Indians were coming. It was related that ribbons, corsets, and many bits of paraphernalia were strewn along the road from Wilsonville to Montevallo as the residents left in great haste.

On 10 November 1840 a James McGowen of Shelby County filed on a parcel of land in the area one mile from Wilsonville on the Coosa River, that would later be known as “McGowan’s Ferry.”

Both James W. and George W. McGowan enlisted and served in the American War between the States.  George purchased the site of McGowan's Ferry in 1874 from B. Averitt.  It is unclear if he and James W. were related to the James McGowin who purchased the land in 1840. James and Julia Johnson McGowan had been living in Columbiana but moved to Wilsonville between 1870 and 1878 and may have made the move when G.W. purchased the land from Averitt.
The town of Wilsonville was first incorporated in 1897. G.W. McGowan was the first mayor. He married Mary Jane Blockton and after her death in 1888 remarried Sarah E. Privett of Calhoun Co, Alabama in 1889. He died in 1903 and is buried in Wilsonville Cemetery.

The McGowan Ferry ceased operation in 1939.  It was an important linked across the Coosa between Shelby and Talledega Counties.   ~ from History of Wilsonville, Alabama 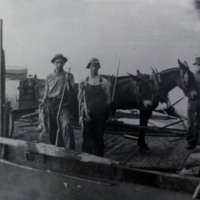 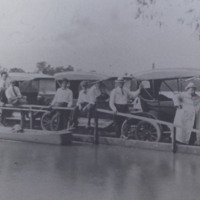 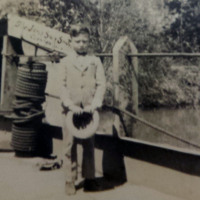 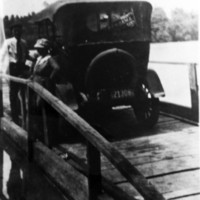 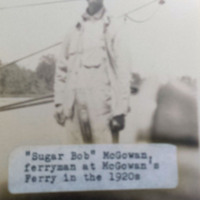